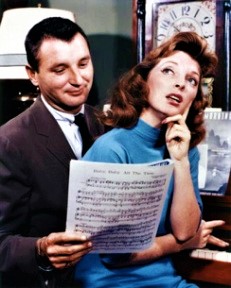 Everything he touched turned to gold.

The song was inspired by a 10-day, cross-country drive taken by

Bobby and his first wife, Cynthia.

As a former Marine, Bobby was accustomed to drive and discipline. He was beloved and respected as a family man, musician, and actor.

Following their successful individual and joint careers in music, Bobby Troup and his wife Julie London were cast in a five-year run on the hit 1970s series, Emergency!